Our commitment. Your success. 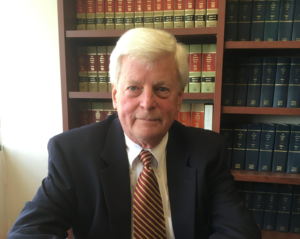 Mr. Jenkins is an experienced and highly regarded trial attorney and civil litigator with over 45 years of experience practicing law in Maryland, with a primary focus in Baltimore County, representing clients in a wide range of legal matters. Mr. Jenkins has worked with and mentored some of the best attorneys in the state, including current Circuit Court Judges. He will provide you with zealous representation to help you obtain the best result for your family and specific situation.

Mr. Jenkins has been accepted numerous times by the Circuit Court for Baltimore County bench as an expert involving legal standard of care, domestic law as well as vis a vis trust administration to include trustee duties and responsibilities to beneficiaries not to mention numerous appointments over the years as: guardian of property; ad litem counsel for allegedly disabled people in guardianship proceedings; receiver in receivership actions (appointed by late Judge J. William Hinkel); liquidator of limited partnership per Corporations & Associations Article '4A-606 (appointed by late Judge Dana M. Levitz); and alter ego liaison to late Judges Robert E. Cahill, Sr. and John G. Turnbull, II of the Circuit Court for Baltimore County and to retired Judge G. Darrell Russell of the District Court of Maryland for Baltimore County.

Admitted to practice before Courts of Maryland, 12/75

Admitted to United States District Court for the Districts of Maryland

and of Florida (Middle Division), and Fourth, Fifth and Eleventh Circuits